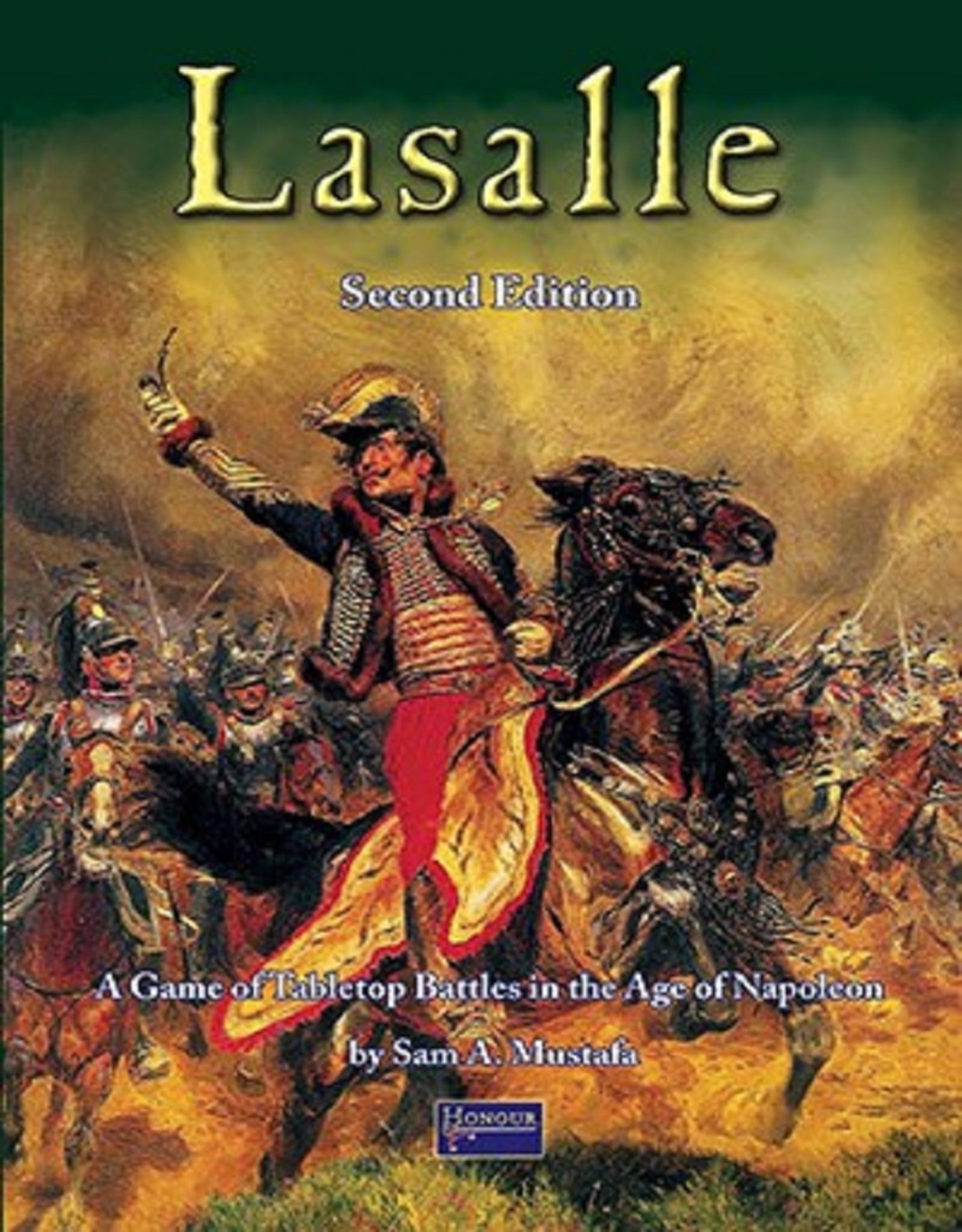 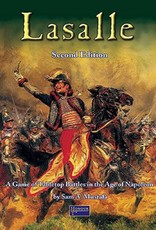 Lasalle Second Edition is a revision of the award-winning 2009 petit-tactical game of Napoleonic warfare. Lasalle is ideal for small tables and tournament play.

This version is the beautifully-illustrated full color 154-page book with all the basic and advanced rules, scenarios and appendices.

Lasalle: the Game that Launched the Honour Series

Lasalle was a tactical Napoleonics game in which any army could fight any other. It had an army-building system that used no points. It had an abstracted basing system determined by unit formations rather than historical companies or platoons. It did not specify a precise figure-to-man scale, nor how many minutes were represented by a turn. It had an unusual turn sequence in which movement happened last, so that there was no need for traditional things like “opportunity charges,” defensive fire, or emergency tests to change formations. It had no written orders, nor in fact much of a command system at all. The designer’s notes were scattered throughout the book to explain the “why” of each section.

In other words, it didn’t look or play much like the Napoleonic games that had gone before it.

Over the years, as thousands of people played and discussed the game, I have had the opportunity to give a lot of thought to the ways it could be improved and refined. Lasalle is therefore the first Honour game to return in a new Second Edition.

What Has Stayed the Same?

Lasalle II keeps the original game’s scale and perspective. You are still a division or corps commander leading battalions of infantry, batteries of artillery and regiments of cavalry. A game is still an affair for about three hours’ play on a modest table with about a dozen units on each side. And you can still choose between historical scenarios and pickup games using fictional armies.

Like the original, Lasalle II is a fast-playing game with no paperwork other than a simple marking of disruption against a unit’s track. As you can see from the samples and Quick Reference Sheets, the game is still suitable for beginners as well as veterans.

But aside from that… almost everything else is new.

What’s New in the Second Edition

A new sequence of play, driven by momentum and interrupts, allows players to do virtually anything in any order, differently every turn. You might resolve combats first, then move, then shoot, then rally, then move again, then resolve combats again, and so on. Actions in one part of the field are not necessarily on the same clock as those in another part. This radically new sequence means that you can never be certain what your enemy does in response to your decisions, nor how many opportunities he will have to thwart your plans.

Completely new rules for the use of the general figure (i.e. “you”) permit you to choose the personality and effect of your intervention in the sequence. You might be an artillerist, or a dashing cavalier, or an aggressive hero in combat, and so on. But the more you intervene in the action, the less momentum your force has to move and fight overall. You are presented with the choice between micro-managing a portion of your force or supervising the whole force from a distance. The latter, obviously, is a safer choice and one that won’t get you killed. The former is the way to go if you want to feature in a glorious Romantic-era painting.

Skirmishing has been reinvented from the top-down. The two sides contribute skirmishers to their opposing “screens” and each turn they determine which side’s screen has the advantage. That, in turn, affects the momentum and sequence, not to mention possibly preventing worn units from rallying, obscuring targets from shooters, or even sniping at infantry units as they try to change formations. Each general must decide whether and how to reinforce his skirmish screen in mid-battle if he fears that he is losing the initiative.

Movement has been radically simplified. Rather than worrying about evolutions of individual units, movement gets you from point A to B with a certain number of “complications” that accrue as you try to do difficult things like changing formation near the enemy, moving through difficult terrain, interpenetrating, or attacking. The more complications, the more of your momentum is required just to keep your troops on the move.

The shooting mechanism, inspired by my game Maurice, is perhaps the only element of the new game that is more detailed than its predecessor in the first edition. It does a better job of reflecting the importance of terrain upon artillery fire, and offers more granularity regarding the effects of musketry and canister. Units become “shaken” by fire at different points depending upon their discipline, which in turn affects their own fire, not to mention their ability to carry out your commands.

Combat has been redesigned so that it is a more decisive either/or experience. Troops either press an attack home, or they are discouraged and fall back with few casualties to either side. Two annoying glitches in the first edition have been corrected: it is no longer possible to overwhelm a defender purely by massing numbers against him, and the fate of an infantry square is now entirely dependent upon the infantry’s steadiness and level of disruption.

Rallying is now a potentially risky procedure, in which failed attempts actually accelerate a unit toward dissolution.

Twenty-six pages of Advanced Rules offer a huge variety of “flavor” that you can add as desired. These include new assets such as rockets and howitzer batteries, sapeurs, aides-de-camp, or partisans operating off-table to delay your enemy’s reinforcements. The advanced rules include new doctrinal options such as early-war “linear” tactics, irregular formations, regimental and battalion guns, and more literal placement of skirmisher formations. Rules for large multi-player games, the effects of different ground conditions, and additional personality traits for your general are among the many options.

As with the original Lasalle, the new game walks you through the creation of an historical scenario but also provides everything you need to create fictional forces for pick-up games or tournaments at your club. The new 60+ page Lasalle Army Maker is now a free downloadable PDF available from the Honour website. It uses the “open architecture” system featured in my games Blücher and Rommel, by which you may adjust the values of any game units to your liking if you disagree with the official stats.

If I Had to Summarize it in Three Sentences…

I’d say that Second Edition Lasalle is a much more holistic game where you are playing not just individual units but rather an entire military effort, and everything affects everything else. You control the sequence and pace of events while your opponent tries to wrest that control from you. What your soldiers can accomplish is not just the result of moving them and rolling dice, but part of the overall situation into which you’ve led your army. 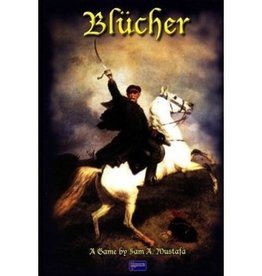